No one writes songs about Pat Watson. As the son of a coal miner, he missed out on both Loretta Lynn’s “Coal Miner’s Daughter” and Dusty Springfield’s “Son of a Preacher Man.” That’s okay, though. Life isn’t about being famous or immortalized in song.

“You probably never met nobody like me,” Pat said.

He’s right. People as passionate as Pat are few and far between these days.

He’s a US Navy veteran who served in operations Desert Shield and Desert Storm, but now he owns a couple of restaurants around Smith Lake and a real estate company. But he says those ventures are just day jobs to occupy his time and energy. His real calling is to spread the word about Jesus to whomever will listen, whether it’s during his business hours or at the church where he’s a pastor.

“I’ve always had this gift of gab, which also I believe comes from God,” Pat said.

For Southerners, storytelling is an art. It takes skill and practice to be able to slip a phrase into the middle of an anecdote — something like, “My grandpa set the woods on fire because he was drunk“ — and then be four twists and turns into the rest of the story by the time the listener catches up with what just happened.

Pat has that skill, and it’s easy to get so wrapped up in what he’s saying that you forget you were originally just ordering a plate of meatloaf and baked beans — both indescribably delicious, by the way.

“I only have time for love,” Pat said. “I don’t have any time to let the devil work to look like I’m trying to pull up flowers, ‘cause I’ve got to spend a lot of time planting flowers.”  Now there’s a classic example southern-speak.

Pat had a simple childhood. He was raised in Arkadelphia, with a strong work ethic stemming from his parents’ background.

From an early age, Pat’s northern roots made him stand out. When everyone else was driving tractors, Pat was riding a motorcycle.

“My daddy just always gave me a different outlook on things around here than what the other people was able to give me an outlook on,” Pat said.

Pat made it through high school — he knew his formal education would be ending after the 12th grade.

“The only thing that kept me out of college was high school,” Pat said.

He assumed his father would get him a job at the coal mine after high school, but he refused to bring his son into the dangerous industry. So Pat joined the Navy and ended up spending his 19th birthday in Iraq.

When his father had a heart attack, Pat received a humanitarian discharge and came home to take care of him. Once home, he got a job in a local plant thanks to a local businessman he had met years earlier — when his grandpa set those woods on fire.

See, when Pat was in second grade, he met Tom Drake, a professional wrestler turned small-town-lawyer, when Tom defended Pat’s woods-burning grandpa. Tom was the first person Pat had ever seen in a suit, so when his teacher asked him who would he would vote for as president, Pat answered, “Tom Drake.”

Somehow word got back to Tom. He wrote young Pat a letter and told him to call if he ever needed anything. Well, Pat kept the letter for all those years and called him for a job when he got out of the Navy. Tom kept his word.

You can’t make this stuff up.

Pat’s father took him to church every now and then when he was a kid — usually when his dad was feeling bad about something — but it wasn’t until disaster struck twice that Pat really started believing.

When Pat spoke with his dad after that heart attack, his dad told him what he saw when his heart stopped. And it wasn’t angels and beautiful lights either.

“All these movies about people dying and seeing the light … I didn’t see nothing,” Pat’s father told him. “All I felt was cold, and it was dark. And I was there, and I was alone.”

When he got out of the hospital, Pat’s dad went straight to a pastor friend — a man who used to preach in cotton gins in his younger days — to find out more about what happens when you die.

He got saved, and Pat’s mother joined him shortly after.


One Sunday, Pat needed his father’s help moving a couch. (We were surprised, too, that Pat would ask his dad to move a couch after dying twice!) But when he called, his dad told him he was going to church and could help afterwards. He had never invited or pressured his son into going to church, but at this news, Pat told his father he wanted to go to church with him. You see, Pat, being the rebellious young man he was at the time, believed his father thought he was better than Pat. And he wanted to go to church with him almost out of spite.

“I called him back and said, ‘Hey, I’m not too good to go to church with y’all. How about I just go to church, … and we’ll go eat and go get that couch,’” Pat said.

His mother answered when he called a second time. And Pat told her he had a warning for all those church people he was sure would try to convert him.

“You better tell all those people over there not to mess with me,” he said. “I’m telling you Momma, I don’t believe in all that crap. They better not come up; they better not talk to me. … I’m just coming there to see what y’all doing, and I’m leaving.”

Well, they didn’t mess with him. In fact, they were all lovely people who accepted Pat as he was. But God had other ideas.

While the preacher was speaking, Pat found himself overwhelmed with emotions. He went to the bathroom to pull himself together and stood in front of the mirror, washing his face and trying to figure out what was going on.

When he went back to the sanctuary, it was time for the altar call. Pat walked down to the front, and the rest is history.

“That pretty much busted it wide open,” Pat said about the single church service that changed his life.

A few years later, Pat felt that often talked about pull. He knew he was supposed to be a minister, was supposed to lead a church. But he put it off for a while because he didn’t know how to preach like the other people he knew — in a style he described as “not all Joel Osteen and not all Jimmy Swaggart.”

The pull didn’t stop until he finally decided to step up and join the church in a leadership role.

The Devil and a Dream

In true, southern-storyteller style, Pat talks about the time a few years after he was saved, when the devil woke him up with a dream he was having about the dog tags he got when he enlisted. Dog tags identify the soldier and his/her religion so, in case something happens, the unit commander can contact the corresponding church representative — a priest or a rabbi or a pastor— to give last rights or perform a funeral.

In Pat’s dream, Satan was holding Pat’s dog tags up and declaring Pat had no religion. The dream unnerved him.

“I’d never told nobody what I put on my tags,” Pat said. “I (had) put … ‘no religious preference’ because I didn’t have one; I was not saved.”

He was already a believer by the time he had that dream, but he said it made him realize he needed to study the Bible more, learn more about the enemy he faced.

“I knew the Scriptures said the devil was an adversary. … If you have an adversary, you need to know that adversary,” Pat said.

Pat has had a busy life, with careers that usually overlapped. Even today he owns two restaurants, works in real estate, preaches at his own church on Sundays, and works ministry by organizing men’s events. He said God gives him so many ideas, he can hardly keep up with them all.

Pat and his wife, Kat, have four daughters — three biological and one adopted — ranging in age from 27 to 11. They also have two grandsons. When one daughter was diagnosed with dyslexia, Pat knew he needed to find something that would make a good career for her, something she could take over and run once she was grown, something that didn’t place much emphasis on words and letters. She had been diagnosed young and received intervention services early, so Pat knew his daughter would be able to succeed in an industry that made sense in her brain.

That’s how he got the idea for Kat Daddy’s. The Watson family had always cooked and even catered a few events in the area, so opening up a restaurant was a no-brainer. 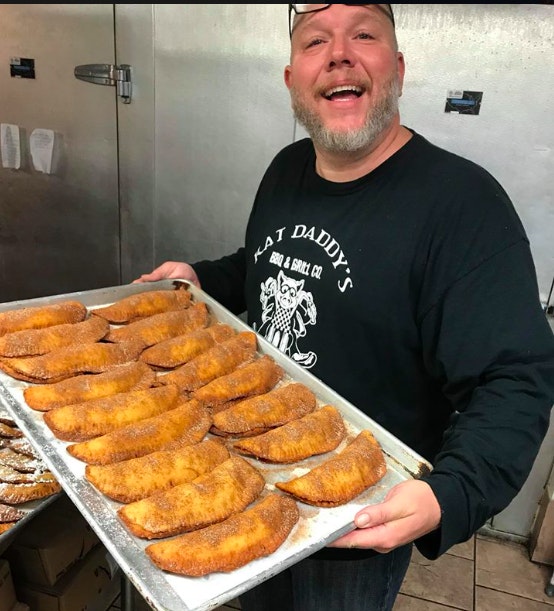 Kat Daddy’s opened four years ago near what locals say is the third cleanest lake in the country. In those four years, Kat Daddy’s has become well-known for its catfish, country fried steak and all things barbecue. Pat smokes all the meats right there next to the building, probably knowing the smells alone cause many passersby to pull right into the parking lot.

In addition to dishing up delicious, southern cooking, Pat is quite vocal about one thing: Kat Daddy’s provides financially to allow him to do what he’s been called to do — share the Gospel freely with anyone who crosses his path.

Kat Daddy’s is a huge success ‘round the Smith Lake area. If you stop by the restaurant on County Road 222 in Bremen, In Cullman County, be sure to ask for Pat. You’ll get a big ol’ helping of church and southern hospitality right alongside your barbecue.

Jessie lives in Meridianville with her husband, baby and four dogs. She thrives on chaos, and loves finding good news stories where you least expect them.

Keep Up with Great Stories from the TN Valley

You have Successfully Subscribed!